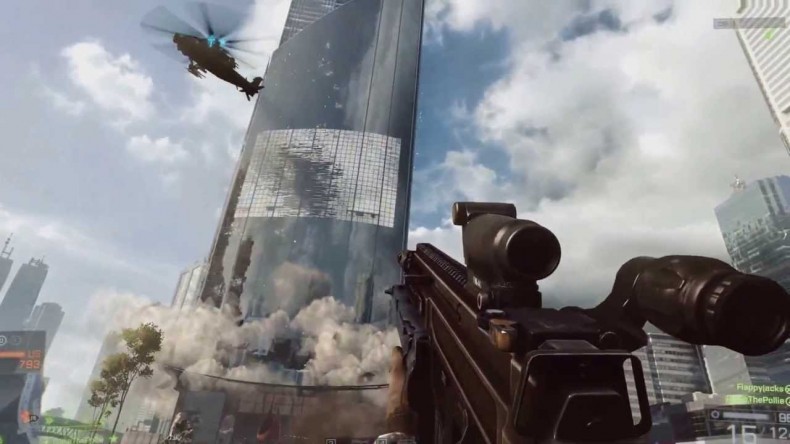 Graphics don't wow like they should, spawn killing is an issue for domination, nothing new or original to the franchise, customization ripped straight out of Call of Duty

Concept
A-
Fun
A
Potential
A
Vision
B
Total Score
A

So far I am pleasantly surprised by the Battlefield 4 beta and feel the full game will be an above-average FPS. Classes and vehicles feel balanced and the large maps leave for an almost excessive amount of strategic ideas. Plus destroying a skyscraper to flush out two guys or jumping off of a large building to throw C4 on a tank never gets old. Graphically, it doesn't seem much better than Battlefield 3 and there isn't anything that is ultimately new or original to the franchise. Still, I am looking forward to the insane sandbox multiplayer later this month. If DICE can put a little more polish on their game, maybe they'll come on top against Call of Duty this year.

I have always found the Battlefield series to be somewhat inconsistent.Â  On one hand, I believe Bad Company 2 to have one of the best multiplayer experiences of all time.Â  On the other, I thought Battlefield 3 was a disappointing game marred by balancing issues and a style way too similar to its rival, Call of Duty.Â  As is tradition with a new Battlefield game on the way, EA has officially released the open beta for Battlefield 4‘s multiplayer.Â  After an extensive trial with the beta, I feel there is much promise for the upcoming title.

Only one map is available to play in the beta and it is incredibly massive in every sense of the word.Â  The map consists of five capture points evenly distributed among the large stage.Â  Every point is surrounded by large buildings, including skyscrapers, and it is very possible to reach the top of each building to use as a vantage point.Â  My first time was a little daunting because the size of the map of overwhelming and adds a learning curve which needs to be mastered in order to perform well in the match.Â  Bigger isn’t always better, but in Battlefield 4, it is both impressive and adds strategy to the core gameplay. 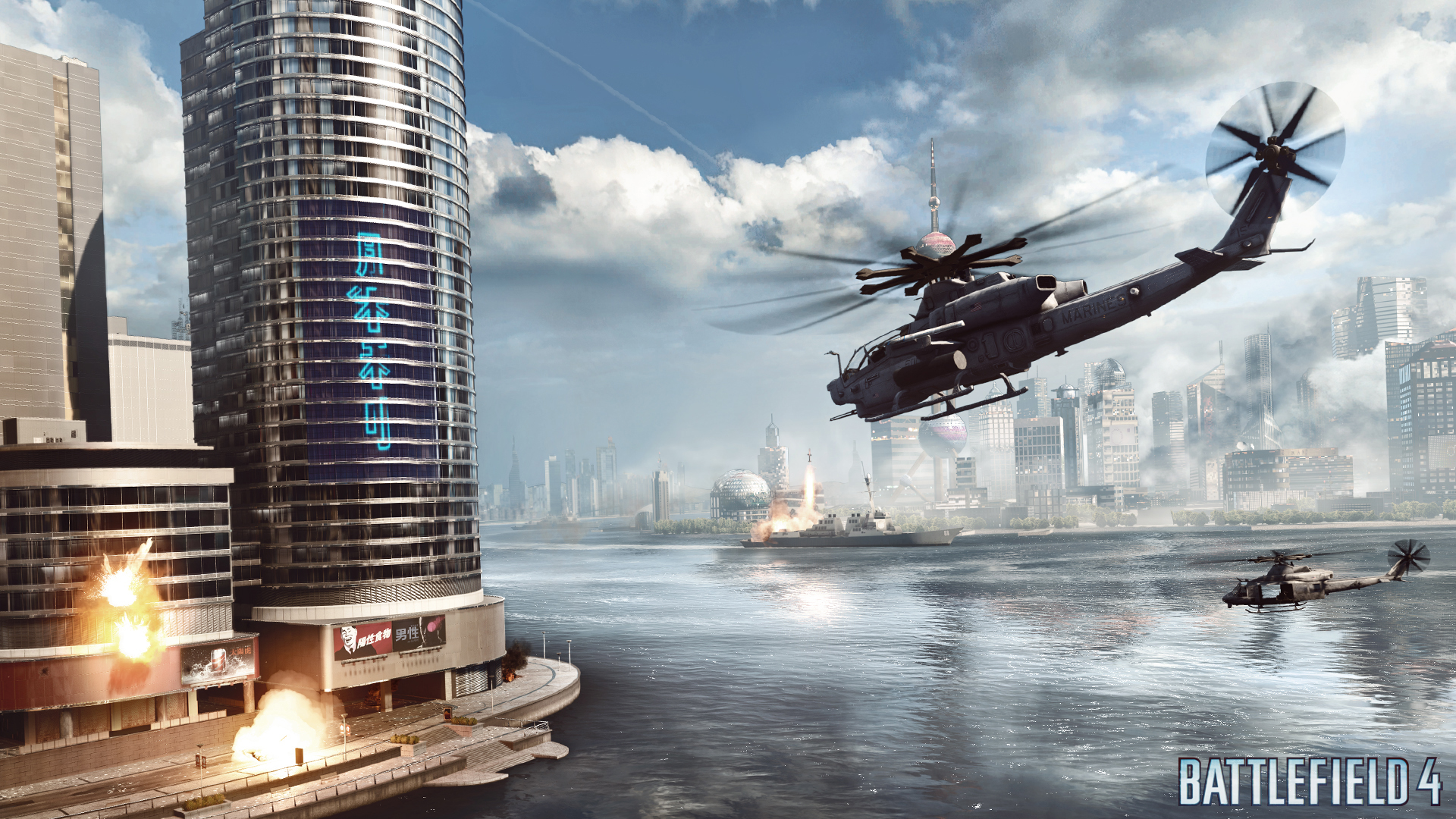 The beta only contains two different game modes: Conquest and Domination.Â  The first mode, Conquest, requires a large group of players to capture and defend various point scattered on the map while fending off the enemy team.Â  This mode is pure chaos as up to 64 people simultaneously destroy each other through various means.Â  Conquest allows both infantry and vehicular combat giving players the most variety of the two.Â  Battlefield veterans will instantly recognize this mode from the previous games and will have no trouble jumping back in.Â  While this mode is the highlight of the series, newcomers may have trouble getting the hang of it due to the learning curve commonly associated with Battlefield.

Newcomers will probably start off with the beta’s secondary mode, Domination.Â  Much like Call of Duty, there are three points to capture, but the game is decided by the team with the most kills.Â  This is a good mode for newcomers to get their bearings, but the capture points are only meant to give players extra experience and spawning back in is randomized.Â  In conquest, players can choose where to spawn and avoid the dreaded spawn-kill that can be found stalking the Call of Duty multiplayer but not in domination.Â  Considering there will be less complex modes like Domination in the final product, DICE needs to fix the spawning issues and modify the pointless secondary objectives.

I found the biggest problem with Battlefield 3 was the balancing of weapons and classes, but it seems the developers tweaked these problems to near perfection in Battlefield 4.Â  The same classes return for another round: Assault, Engineer, Support, and Recon.Â  Each one contains the same types of weapons and equipment from the previous game except this time with some much needed adjustments to damage output and weapon range.Â  Assault contains the second most powerful weapons which excel in close to mid-range combat while allowing the player to heal and revive downed allies.Â  This class can also use a grenade launcher capable to instantly killing an enemy and do minimal damage to vehicles.

To do real damage to enemy armor, players will want to use the engineer class.Â  Against other infantry, the engineer’s submachine is only superior in close quarters since the damage output drops when firing on targets from a distance.Â  This is fire since the engineer can easily cripple or destroy vehicles within seconds.Â  By working with the recon unit, who can tag an enemy vehicle, the engineer can also lock onto vehicles making for a deadly effective team.

The last is the support unit which is used to supply ammo and suppress enemy infantry.Â  I feel like the support unit is the odd man out because the weapons are cumbersome and difficult to use despite high damage output and it seems to be designed mostly for assisting the rest of the team.Â  It is also worth noting the secondary tool, the airburst grenade launcher, is useless because of its ridiculously low damage output. Not much has changed with vehicles aside from some stat tweaks and easier controls, with the exception of the choppers which still require a masters in engineering to fly straight.Â  One of the most annoying experiences in Battlefield 3 was when I hit an enemy light combat helicopter with three stinger missiles and not even come close to destroying it; not so in the new game.Â  After a nearby recon unit tagged and enemy helicopter, I locked-on and landed a hit resulting in the destruction of the vehicle.Â  APCs and tanks still receive about the same damage and can be slowed down by hitting certain areas, but the effect on tank fire on infantry has been decreased significantly.Â  I believe only a direct hit will instantly down an enemy, but hitting the area next to them won’t do as much damage as in previous games.Â  Aside from a few nitpicks, the vehicle portion of the game seem to be on track.

On the deployment, or spawning, screen players can still spawn on the squad’s location, but can also gauge the environment from there before jumping in.Â  By clicking on a friendly unit, the player can see from their squadmate’s helmet cam and see if it’s safe to deploy.Â  Players need to be careful in deployment choice since you never know how long the base will be standing upright.Â  Remember those skyscrapers I described earlier, well by the end of the match, at least one of those was nothing more than a pile of dust and rock.Â  Another thing I noticed is if a player does a certain amount of damage to an enemy but another friendly finishes the job, the first player gets the point for the kill and the other the assist.Â  Honestly, this rule was a long time coming and hopefully other competitive shooters will implement this rule as well.Â  On a lesser note, Battlefield also borrowed another concept from its rival in which players can now customize an emblem, their dog tags, and gun camouflage.Â  Customization is always a great idea, but this is almost exactly like Call of Duty‘s system.Â  Hint: next time you steal an idea EA, rip of the trademark logo first.

So far I am pleasantly surprised by the Battlefield 4 beta and feel the full game will be an above-average FPS.Â  Classes and vehicles feel balanced and the large maps leave for an almost excessive amount of strategic ideas.Â  Plus destroying a skyscraper to flush out two guys or jumping off of a large building to throw C4 on a tank never gets old.Â  Graphically, it doesn’t seem much better than Battlefield 3 and there isn’t anything that is ultimately new or original to the franchise.Â  Still, I am looking forward to the insane sandbox multiplayer later this month.Â  If DICE can put a little more polish on their game, maybe they’ll come on top against Call of Duty this year.

Former Contributor Chris West is a graduate of Texas Tech University where he earned his BS in Electronic Media in Communications. Chris has been passionate about games since he was a kid and today prefers games with a strong narrative. He also has a soft spot for horror games, legitimately scary games mind you, and any game claiming to be challenging, Dark Souls for example. When he isn't playing games, he is pursuing his other passions: music and photography. Chris can play both guitar and bass and then take high quality pictures of the performance with his camera. In the end, Chris enjoys writing about his passions and ideas, when he isn't destroying his friends in Call of Duty.
You might also like
Battlefield 4Betadice