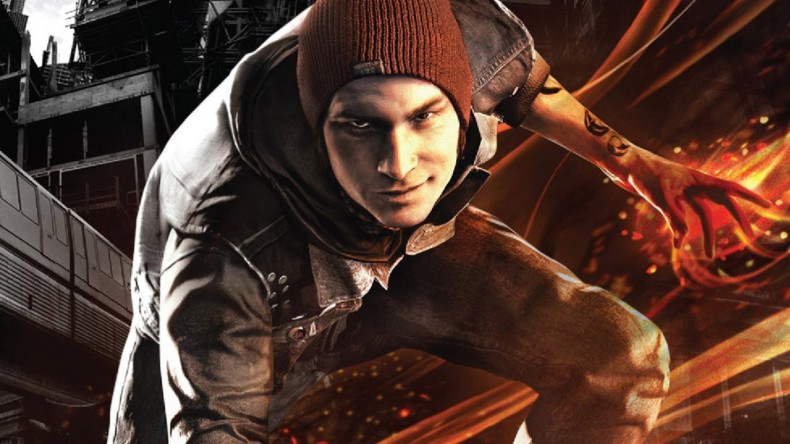 Short, Parkour can be an issue if you aren't careful

If you enjoyed any of the previous entries in the Infamous series, this one doesn't disappoint. Considering you get to switch between 4 different powers as opposed to just one (solely electricity in the previous games), this makes for a lot of variety and allows you to pick your favorite power while still utilizing all of the available powers. The powers allow you to personalize your gameplay to however you wish to play.

Hungry? Eat some smoke. Have a little neon too!

InFamous: Second SonÂ Â is centered around the life of Delsin Rowe; a conduit with dormant powers. His power is unlike those of the other conduits who have one set power granted to them by the blast core. Delsin has the ability to absorb powers from other conduits like a sponge and can then use them himself. Thatâ€™s not to say that he can completely take the power from other conduits; they keep their powers but once Delsin touches them (whether itâ€™s skin-on-skin contact or not), he then absorbs their power.

Delsin is a free spirit who just wishes to spread his â€œart and causeâ€ around the town; heâ€™s a graffiti artist. The game opens with his brother, Reggie (the sheriff of the town where they reside) going to arrest Delsin for vandalizing a billboard of himself. Yes, Delsin vandalized his own brotherâ€™s billboard that was meant to congratulate him on becoming the town sheriff. A bus transporting inmates captured by the Department of Unified Protection (DUP) (a branch of the military that captures and conducts tests on conduits) crashes with three escaping. When Reggie goes to investigate the crash and make sure no one is injured, one conduit holds Delsin hostage. When Delsin grabs his arm to try to get him off, he absorbs his first power, smokeâ€™ and the fun begins. The game tasks Delsin with finding the leader of the DUP, Augustine, to help save the lives she ruined with her concrete powers. She took it upon herself to alter the skeletal structure by creating shards of concrete growing out of her victimsâ€™ bones. All Delsin wants to do is save the people that sheâ€™s hurt.

The game plays just like the previous games with the parkour aspect. Running forward will have Delsin hop up on ledges to balance and run on. Sometimes, as was usual in previous entries for me as well, this aspect is problematic during battle sequences. While trying to shoot at the enemy and avoid getting shot at in return, I would end up hopping up on a ledge and by the time I realized I should jump off the ledge, it was too late. The good thing about this game is that the powers all have a dash move that helps with these issues. Pressing circle enables the dash move for each of the four powers that can get you out of almost any bind of the parkour variety.

Parkour issues aside, the gameplay is great. The camera speed is great for shooting whether it is zoomed in or not. The graphics are amazing on both the character models and the environment. Delsin moves very naturally and smoothly. As always, the game features the typical karma system that grants Delsin special powers depending on if heâ€™s good or evil. The building designs are great, but they are a bit of a hindrance when using the neon power. The neon power grants Delsin the ability to run up walls; when trying to run up a building, you might sometimes get stopped by a balcony or by an architectural design that has the building jutting out past the lower portion of the structure (such as a â€œceilingâ€ aspect over an ATM machine). Upgrading the powers is done by collecting blast shards and the skill tree is very easy to understand. It shows you right on the power name how many shards are needed and, in case you canâ€™t see that, the game tells you again when you check the description of the power. Some powers have upgrades that vary in blast shard price; some require only one blast shard for an upgrade, whereas some might require anywhere between 4-8.

The game can be completed fairly quickly, and getting 100% completion isnâ€™t that demanding. There are a lot of side missions so there is still quite a bit to do after you finish the game. Also, considering you get the fourth and final power at the very end of the game, you might feel compelled to mess about the land and test out your newest power. If you enjoyed any of the previous entries in the Infamous series, this one doesnâ€™t disappoint. Considering you get to switch between four different powers as opposed to just one (solely electricity in the previous games), this makes for a lot of variety and allows you to pick your favorite power while still utilizing all of the available powers. The powers allow you to personalize your gameplay to however you wish to play.

Former Editor-in-Chief Angie has a passion for gaming. She has never been able to put the controller down since first picking up an SNES controller at the age of 3. She loves researching anything gaming related and talking games amongst her friends.
You might also like
Infamous second sonps4