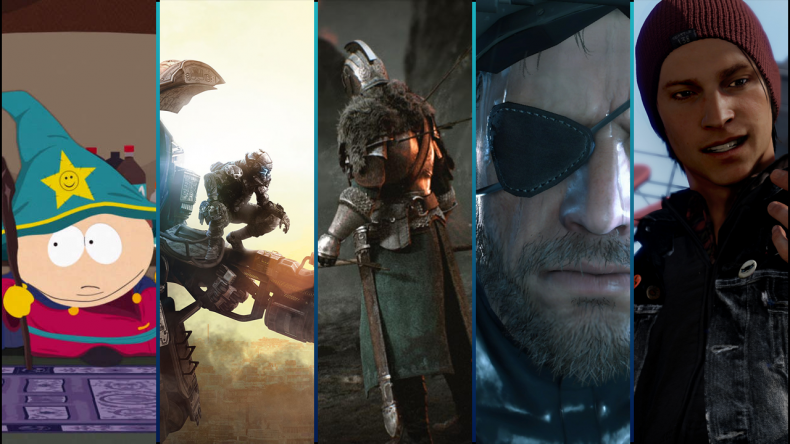 March 2014 is an undeniably massive month for the video-game community. With a handful of the year’s most anticipated releases going along side some of the more uniqueÂ experiences, the 31 days of March are going to be truly tough on our wallets.

Below, we’ve compiled a near complete list of all of the games to release in March. Remember, some of the dates are subject to sudden changes, so don’t hate us if the game you’re hyping up doesn’t come out on the date listed.

South Park: The Stick of Truth

After numerous delays and a change of developer, it looks like South Park: The Stick of Truth is finally ready to be released on March 4, 2014.

Directly influenced by Matt Stone and Trey Parker (the creators of South Park), The Stick of Truth looks like itâ€™s on itâ€™s way to becoming akin to a fully interactive episode of South Park, allowing for the free exploration of the wacky world fans of the show have come to expect.

Best of all, the uncut version of the game was refused classification until they were edited in both Australia and Europe, so you know itâ€™s going to rock.

XCOM: Enemy Unknown was one of my favorite, and most unexpected games of 2012. Breathing new life into the strategy genre with excellent controls and deep strategy mechanics, if you havenâ€™t at least tried XCOM: Enemy Unknown yet, you really should.

If you want to try it out on the PC (where it should be played), 2K Games will be releasing The Complete Edition on the March 4, 2014. This complete version will include all downloadable content for the original game, and will only be available on the PC.

Standing tall as one of the most widely anticipated games of 2014, Titanfallâ€™s expert grasp on fast, multiplayer only first person combat has already received an almost unparalleled amount of both critical and commercial praise.

With Titanfall launching in North America on March 11 for PC, XBOX One and XBOX 360, you really have no excuse not to be overly excited.

Praise the dun and prepare to die, Dark Souls is back.

Featuring a new hero, a new storyline, and a brand new world for players to discover, Dark Souls 2 already stands as one of the most anticipated games of 2014, purely on itâ€™s legacy alone. Epic battles with grotesque monstrosities await players brave enough to tackle

Dark Souls 2â€™s many challenges when the game launches for XBOX 360 and Playstation 3 on March 11.

Released in Japan nearly one year ago, it appears that the much anticipated sequel to Atelier Ayesha: The Alchemist of Dusk is finally heading to western audiences. Allowing players to choose between two playable characters, Atelier Escha & Logy: Alchemists of the Dusk Sky will allow players to experience an epic story from two different perspectives, with certain events changing based the character.

Atelier Escha & Logy: Alchemists of the Dusk Sky is set to launch on March 11 for the PlayStation 3, and will be the first of the series available for this console.

If youâ€™re a fan of the beloved Monster Hunter series and games of a similar vein, then I highly recommend that you check out the upcoming Ragnarok Odyssey ACE.

Ragnarok Odyssey ACE is set to release on March 11 for the PlayStation Vita and PlayStation 3.

While Iâ€™ve personally never even heard of Elsa or Anna, Iâ€™ve been assured that theyâ€™re from the latest Dinsey movie â€˜Frozenâ€™. However, Disney feel that theyâ€™re popular enough to warrant their own Disney INFINITY figures, so I guess Iâ€™m just out of the loop.

Launching on March 11, the Elsa and Anna figures are set to bring two individual playable characters (each with their own perks) to the Disney Infinity library, and will be available for every console that is capable of running Disney INFINITY.

Almost 10 years after the gameâ€™s original release in 1995, Yoshi and Baby Mario are back once again, this time exploring Yoshiâ€™s New Island together!

Featuring the classic Yoshiâ€™s Island gameplay with more than a few new features added, such as the Mega Eggdozer and tilt-control functionality, Yoshi will have to transport Baby Mario across gorgeous watercolour levels, protecting him from the perils of the landscape.

You can grab Yoshiâ€™s New Island for the 3DS on March 14.

Launching on March 18 players will once again be given the ability to control the legendary Big Boss, Metal Gear Solid V: Ground Zeroes acts as a bridge between previous games and Metal Gear Solid V: The Phantom Pain, preparing them for the gameplay changes and visual style of the upcoming game.

From Blitzball to battles arenas filled with monsters, Final Fantasy X|X-2 HD Remaster Special Edition contains everything from the original games, and will be available for the PlayStation 3 on March 18.

While cyborg ninjas are in abundance these days, Yaiba: Ninja Gaiden Z, manages to stand out from the crowd with itâ€™s fast-paced zombie slicing action and gorgeously stylish aesthetic presentation.

With hordes and hordes of undead to cut through in a variety of ways, including using his cyber arm as a razor chainsaw or even just ripping an enemy’s arms to use as zombie nunchucks, Yaiba: Ninja Gaiden Z is already anticipated to be one of the best hack-and slash-games of 2014.

You can get Yaiba: Ninja Gaiden Z on March 18 and itâ€™ll be available for Xbox 360, PlayStation 3 and PC.

Set a whole seven years after the events of inFamous 2, inFamous: Second Son follows the story of Seattle based graffiti artist Delsin Rowe who has also gained mysterious powers after coming in contact with another conduit.

Unlike other games in the franchise, multiple power sets known as â€˜Smokeâ€™ and â€˜Neonâ€™ will be available for the player to use, allowing for even more adventurous super-hero action sequences.

inFamous: Second Son is set to release worldwide on March 21 for the PlayStation 4.

Set to be the first of many major expansions packs to Diablo III, Diablo III: Reaper of Souls introduces the Angel of Death MalthaelÂ and challenges players to thwart his attempts of stealing the Black Soulstone.

Along with this new narrative, Diablo III: Reaper of Souls is also set to bring a new class, a new level cap and even a whole new loot system to Diablo IIIâ€™s already extensive experience.

Diablo III: Reaper of Souls will be available from March 25, and requires Diablo III to play.

As one of the most popular tournament fighting games to date, BlazBlue: Chrono Phantasma brings an extra layer of polish, and more than a few new characters, to BlazBlueâ€™s already successful fighting game formula.

Taking place after the events ofÂ BlazBlue: Continuum Shift, Chrono Phantasmaâ€™s story mode is set to have three playable scenarios, while the fighting mechanics themselves have been rebalanced to include a new â€˜Overdriveâ€™ mechanic and a guard blocking â€˜Crush Triggerâ€™ mechanic.

BlazBlue: Chrono Phantasma will be launching on March 25 and will be available exclusively on the PlayStation 3.

The Witch and the Hundred Knight

Released in Japan last year after a number of delays, it looks as if The Witch and the Hundred Knight is finally going to be available to western audiences.

Telling the story of a century long battle between two rival witches, The Witch and the Hundred Knight is notable for its use of a smooth hack-and-slash combat system, isometric stage-based gameplay and beautifully dark fantasy world brought to life by famed artist Takehito Harada.

Youâ€™ll be able to grab a hold of The Witch and the Hundred Knight for the PlayStation 3 on March 25.

After becoming a huge success on mobile devices worldwide, Cut the Rope: Triple Treat is a compilation of the three Cut the Rope standalone adventures exclusively for the 3DS.

Providing players with over 650 unique levels (thatâ€™s more than 50 hours of game-time) that have been redesigned to include the 3DSâ€™ signature stereoscopic 3D effect, Cut the Rope: Triple Treat is a perfect excuse to get into the franchise.

You can grab Cut the Rope: Triple Treat on March 25, exclusively for the 3DS.

Serving as the second part to a two-part downloadable campaign, Bioshock Infinite: Burial at Sea — Episode Two puts players into the shoes as Elizabeth for the first time, as she seeks to bring closure to her story along with Bioshock: Infiniteâ€™s.

Merging the best parts of combat from the original Bioshock with the polish and graphical presentation of Bioshock: Infinite, Burial at Sea shows the underwater city of Rapture in a never-before seen light.

Bioshock Infinite: Burial at Sea — Episode Two is due to be released on March 25 for PC, XBOX 360 and PlayStation 3, and is included in the season pass.

Tasking players with the strategic placement and activation of a wide variety of traps and dangers, properly combining and timing the execution of a master plan is the name of the game, hopefully leading a vast array of heroes to their doom.

You can grab Deception IV: Blood Ties on March 25, when it becomes available for the PlayStation 3 and PlayStation Vita.

Former PR Director James was introduced to the world in a city known for its ultra-violence and â€œOzzy Osbourne accentsâ€. Rather than facing the perils of the outside world, James quickly took to Video Games and Alcohol (not necessarily in that order). Nowadays you can find him at the Staffordshire University Studentâ€™s Union Bar, drinking whiskey and muttering about how he studies Computer Science.
You might also like
bioshock infiniteArticlesFeatures