Before I played Star Wars: The Old Republic, my only real experience with MMORPGs – except for running, terrified, in and out of IRC chats back when that was a thing – was a brief foray into Funcomâ€™s Secret World.Â  Iâ€™m almost 30, so I understand that this is kind of shameful as far as being a gamer goes. Â I donâ€™t know how many hours I spent on Secret World, which for some reason also included a lot of time buying clothing for my character so that she looked like an amped-up Buffy the Vampire Slayer, but I do know I never got very far.Â  I kept wandering into areas of the world that clearly never intended for me to be there, mocking my character level while dispensing with me quickly.Â  Defeat of high-powered enemies often came down to an issue of timing and living on a prayer.Â  One particular boss battle, which had something to do with a ship and Mirelurks or whatever they were, I played probably close to 30 times before narrowly defeating him and then dying anyway because of some spell heâ€™d put on me.Â  Iâ€™m not a terrible gamer.Â  Secret World made me feel awful.Â  (As a side note, I never did much see groups of people running around in the Secret World the way I do SWTOR.Â  This may come down to an issue of longevity and the fact that I played it well after it came out, or maybe people just like to be Illuminati alone but join the Republic in groups.) 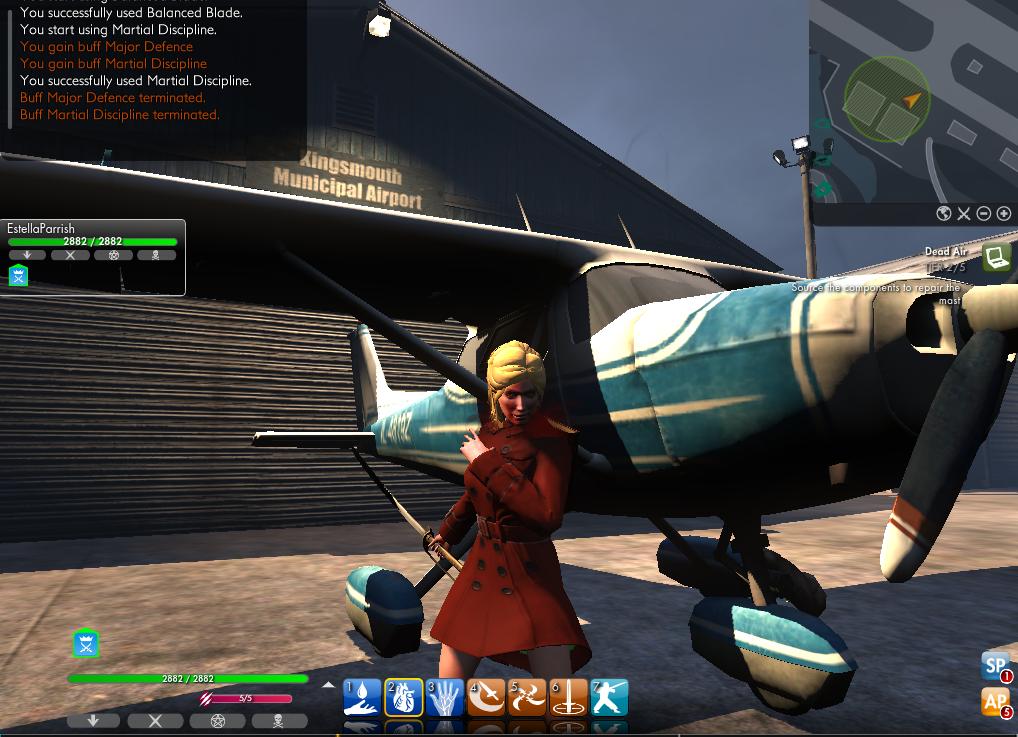 It took me 9 hours to get all of the patches I’ve been neglecting. I think I might also have paid real human money for that trench coat. Â Because the important thing about being an Illuminati is having the right wardrobe.

So you can imagine how I felt about starting Star Wars: The Old Republic.Â  On the one hand, I love just about everything BioWare does.Â  BioWareâ€™s pretty brilliant Star Wars: Knights of the Old Republic (2003) looms large in my personal legend, a feat of narrative design within an excruciatingly familiar intellectual property thatâ€™s imminently replayable, even now.Â  After KOTOR, it seemed pretty clear that a game could both be a BioWare game and a KOTOR game. Â But the truth was that IÂ missed some kind of cultural step somewhere along the way when it comes to gaming. Â Iâ€™m not sure how I did it. Â Except for a brief period in the early 90s when I actually played outside some, I was, more or less, With It. Â But I missed something significant. Â I missed the call to the dark side that is MMORPGs. Â They seem, generally, right up my alley.Â  There is literally no reason why I never played World of Warcraft or EVE or Everquest.Â  If I tell you that playing SWTOR single player was an intellectual or artistic choice, Iâ€™m probably lying to youâ€” but I will say that I did it to some degree to see if you could. 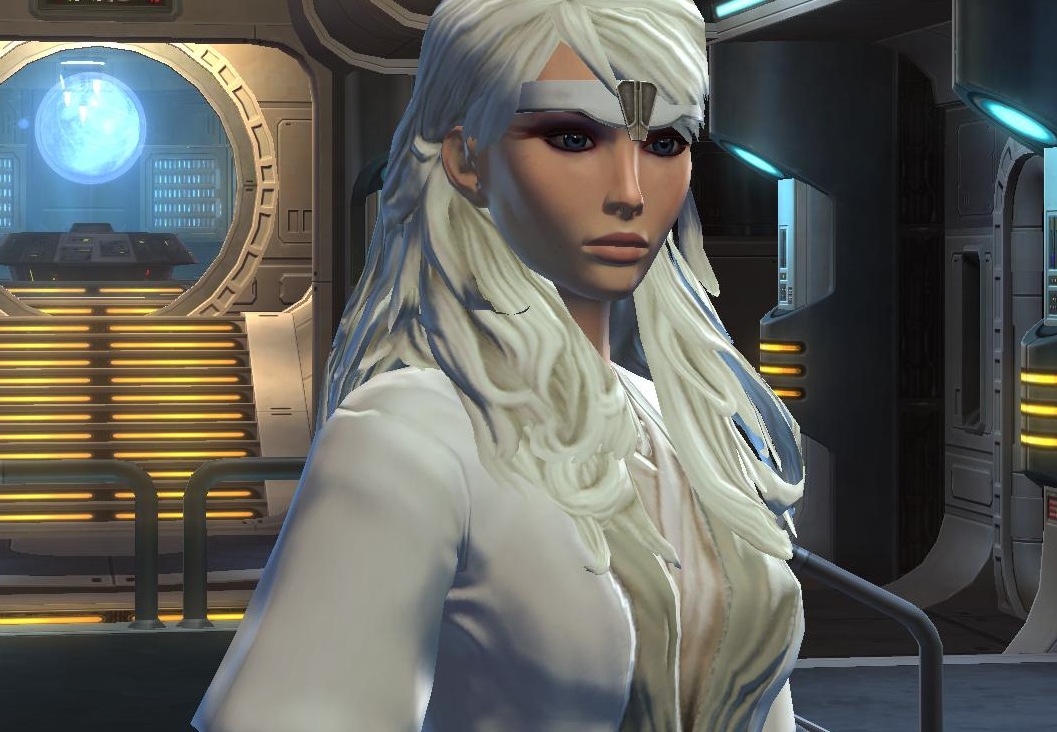 I have no idea why I designed someone who looks like a mixture between Jem and the Last Unicorn but she sure is saucy.

The beauty of Star Wars: The Old Republic is that the answer to that question is that you can. Â BioWare has always been known for their quality of writing, and both of their Star Warsâ€™ games are superior in that respect.Â  I have a strange relationship with morality choices in video games, and I think the world is probably pretty firmly divided in this respect: itâ€™s impossible for me to make the bad, immoral, or in this case Dark Side choice.Â  An early Sith plot point involved torturing people for information (or for fun).Â  BioWare made me feel dirty for feeling like that was the right decision for my evil character, but it was, and I did it, and we all moved on.Â  Except for the guy I tortured.Â  Iâ€™m pretty sure heâ€™s dead.Â  Most of these major plot points are done in single instances.Â  Itâ€™s just you and your companion and your light saber.Â  Your choices are yours alone. 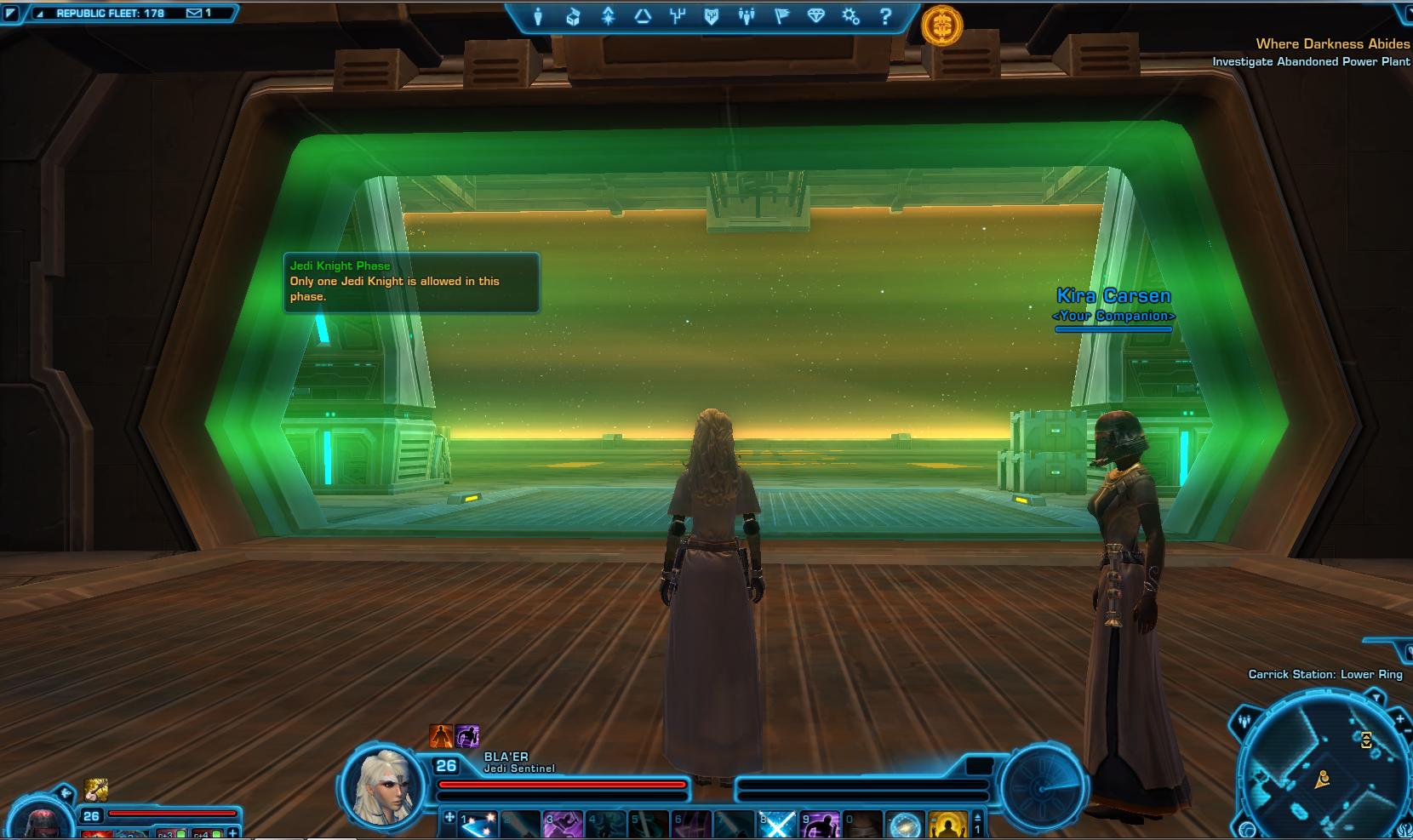 Only one may enter.

The first time playing by myself actually became a problem was when I was at the low end of the level spectrum that I needed to be for a particular boss fight.Â  Iâ€™d bravely charged into my Jedi Knight cave* with my faithful droid by my side.Â  SWTOR does a good job at making sure you aren’t somewhere before you’re an appropriate level, but for whatever reason, again and again, I watched my companion die and then me. Â The built-in delay time to have a medical probe revive me then and there became distractingly and prohibitively longer.Â  I went downstairs to make myself coffee.Â  Eventually I just turned off the game.Â  (This is a long-tested Alice Irvin strategy for dealing with impossible gamesâ€” walk away, forget about it, come back to it months later, forget how to use the controls, spend a week getting back up to speed.Â  See also: Alan Wake.)Â  I called my brother, and he sighed heavily at me.Â  â€œI should have warned you about this,â€ he said, being far more the MMORPG expert than I am, and he introduced me to the term grinding.Â  I came crawling back to it one Sunday morning, determined to level up enough to beat this son of a gun.Â  Several hours and several cups of coffee and several thousand** Imperial soldiers later, I beat that guy.Â  And then the next and the next. 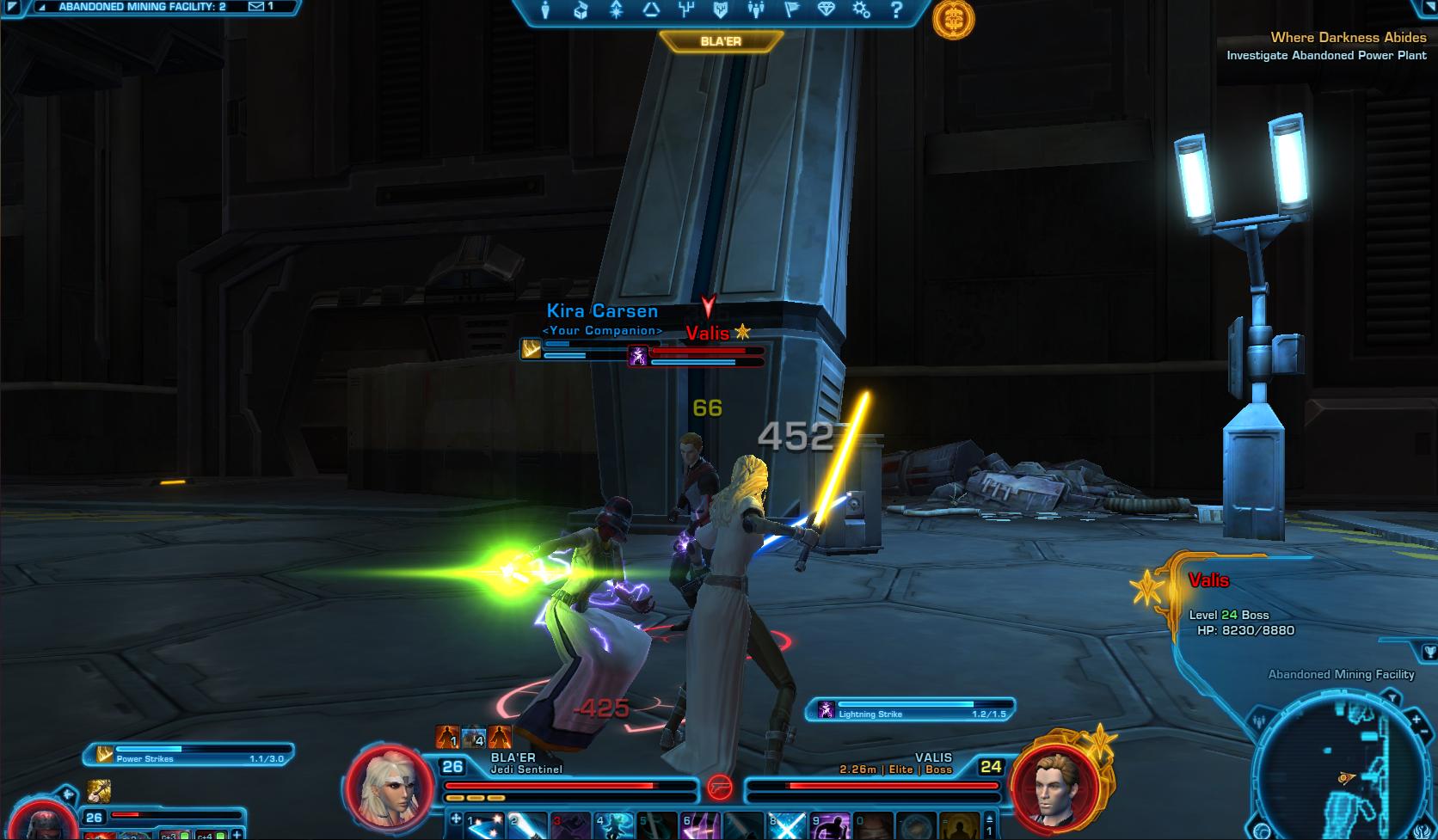 This guy has beaten the crap out of me so many times I’m not convinced he’s not in love with me.

It would have been easier to hit up the group queue, get some group missions out of the way, level up, and move on. Â I could enter into some PvP territory and take advantage of the great gear that would become available to me. Â I didnâ€™t do thatâ€” because I didnâ€™t have to.Â  I could play it like it wasnâ€™t an MMORPG at all. Â And this is whereÂ SWTORÂ succeeds. Â It can be and often is the game you want it to be– whether you’re venturing into PvP territory, you launch into group missions, or you wander around the Republic Fleet searching for that Jedi Knight trainer all by yourself. 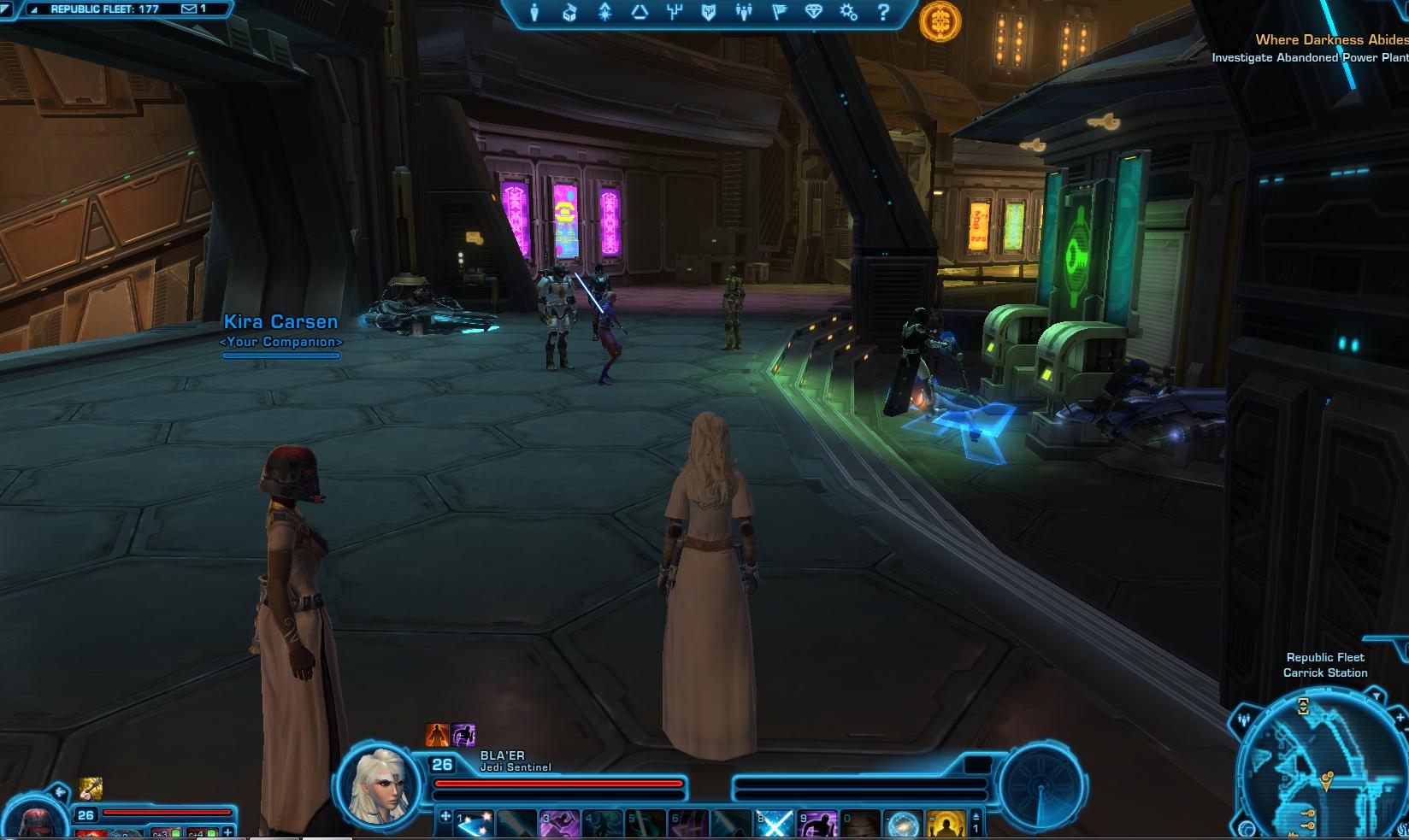 You will never find a more wretched hive of scum and villainy …. I also have no idea how Kira got that bucket on her head. She probably used to be an adventurer.

So I get that Iâ€™m missing out on things.Â  This becomes painfully obvious whenever I go into my mission tracker and disable tracking on HEROIC missions.Â  Itâ€™s like a subtle judgment that Iâ€™m clearly projecting on myself: because you havenâ€™t joined a group, you cannot be HEROIC.Â  I look at the green sheen over entrances and hover over it with my mouse; GROUP PHASE, it says, and I turn away.Â  Thereâ€™s a whole other world to SWTOR Iâ€™m not playing.

Sometimes that little box pops up, inviting me to join a group. Â Itâ€™s usually someone whoâ€™s just helped me kill a herd of rakghoul or whom Iâ€™ve helped to kill an Imperial marksman, and we stand around giving each other what I assume is an invisible head nod or fist bump. Â We look at each other briefly, and that box comes onto my screen. Â Maybe this time, I think to myself. Â And then I shake my head and hit the decline button. Â I imagine the other person looking at their screen, flabbergasted, thinking, I thought this was the beginning of a beautiful friendship. Â One day Iâ€™ll hit accept.Â  I wonâ€™t know what to do after that.Â  If you run into me in the wilds of Tatooine, be kind.

* It was probably a cave.

Former Staff Writer Alice is a novelist, Shakespearean actress, and gamer who once survived emergency surgery in Bangladesh, but still finds most video games more exciting. She still has recurring nightmares about Uninvited (from 1986) thanks to an early childhood playing games on an ancient Mac. She's played Mass Effect more times than most people should own up to and is eagerly awaiting her very own episode of Intervention, which will likely be the Best. Episode. Ever. She also occasionally speaks German, but only when it's most inappropriate.
You might also like
biowareArticles